Back to All Posts
Sales & Marketing

The Best Way To Come Up With Untapped Marketing Ideas

Marketing is all about new projects, fresh ideas, and hacking the company’s growth. Yet, sometimes, the sole core of marketing can be the biggest issue that marketers tackle on their way up. Looking for new marketing ideas can be exhausting and trying to ‘meet the expectations’ is an even more daunting task to cope with.

To resolve this overall constraining problem, I’d suggest that marketers and managers could benefit from the idea coined by Rory Sutherland in his book Alchemy: The Dark Art and Curious Science of Creating Magic in Brands, Business, and Life.

There, Sutherland proposes the approach that the opposite of a good idea can be another good idea. Taking this into account, the common “grass is always greener on the other side” proverb gets a whole new meaning. While usually, it refers to a proverb that describes people’s desire to chase the next big thing, here, it can turn out to be rather beneficial.

Sticking to this idea can help marketers come up with more — and even better — marketing ideas by simply turning around what is already considered to be a good idea. The whole premise sounds great but it’s worth investigating why such an approach should work and bring the promised results.

The whole idea of “the opposite of a good idea can be another good idea” thing works on the assumption that terms irrational and rational are often poorly understood. That’s because what we call rational is not always rational per se but is rather perceived as something rational. Explaining this idea forward, we can easily provide  examples of people mistakenly assuming certain facts, truths, and statuses just because:

That’s also what creates so-called safe work. Meaning that sticking to rational marketing ideas won’t get people fired. In the end, you just stuck to what is believed to be true, right? That’s where Rory’s assumption comes to work. Only when we decide to make room for irrational ideas it’s possible to see the whole plethora of possibilities and new solutions to our issues and projects.

The land of not-so-obvious tips and ideas is, in regards to many industries, an untapped area in which you can discover a myriad of novel ways to approach a problem you’re dealing with.

In his book and in one of his TED talks, Rory brings an example of what London Underground did to improve the customer experience of everyday commuters. Funnily, it wasn’t faster trains or more modern architecture. It was adding the screen displaying the time of arrival of each train. This way they eliminated the feeling of uncertainty that comes with waiting for a train not knowing whether it will arrive or not. As Rory says “People are much more willing to wait for a train that they know will arrive in 10 minutes than wait 6 minutes knowing nothing about the future”. This, according to Rory, was the best per-pound-spent improvement London underground did.

But still, why it works? To answer this question, we have to explore Daniel Kahneman’s Thinking, Fast and Slow in which he explains that humans perceive the reality around them using two of their internal entities. That is one that experiences the reality and the one that memorizes it. Because we not only remember certain events but also interpret them, there’s a bias between what’s rational and irrational to us, humans.

To prove that, Kahneman ran a simple experiment during which he exposed a group of people to two similar events.

First, every participant had to put their hand in a container with cold water. The water was cold enough to create an unpleasant feeling but not cold enough to not be able to deal with it. They would have to keep their hand in the container for 60 seconds. Next, they were exposed to the same water container with the same water. The only difference was that the second situation lasted 30 seconds longer, during which the temperature of the water slightly increased. It was still cold and unpleasant but a bit less cold and unpleasant.

After people went through both events, they were told that they have to do it one more time, but now, they could choose which situation they would rather go through for that last time. Lo and behold, the majority chose the second scenario during which they had to hold their hands in the water for 30 seconds longer.

When you think about it, having the 3rd person view, it seems completely irrational to expose yourself to a longer pain just for the slightly better ending. Yet, this is how we differ when it comes to experiencing certain events and remembering them. This shows irrational ideas work very well for us and can be better perceived than what is often considered to be rational.

Going back to Rory’s findings, he mentions that the Eurostar was put on a mission to improve one of their longest rails. That is the train going from Paris to London. The obvious (rational) idea was to improve the train’s speed and therefore shorten the duration of connection by about 40 minutes. This improvement would take a few years of planning, development, and, most importantly, huge funding. Namely, £6 million.

On the contrary, Rory proposes going for, what seems to be a lower-friction way, (irrational idea) and saving 99% of the budget by installing WiFi on the trains which wouldn’t reduce the time of the journey but would highly increase its usefulness and enjoyment. Rory goes a step further for those who feel like saving only 90% of the budget and coins the idea of hiring world-class male and female supermodels that would serve champagne to the commuters. People would be glad to spend the current journey time on the train and would probably ask for the ride to last a little longer.

This example shows that it really depends on how you look at the problem and not on the problem itself. In the tech world, the difference might be trying to develop a product further and further or providing a more pleasant customer experience and focusing on top-notch customer service.

What we experience vs what we remember

While your first instinct might be to laugh at such ideas, remember that we greatly differ in terms of what we experience and how we remember it. This impacts our choices and how we interpret the reality around us. Taking all of that into consideration, we can see that rational can take you only as far as what has been already achieved.

On the other hand, real growth comes only with what is perceived to be irrational. This also comes from the internal fear that marketers suffer from or that is put on them by authorities, to try out new things and experiment with untouched marketing ideas.

How to benefit from volatility

The whole idea of the existence — and often the margin — of irrational ideas over rational ones, taps into a term coined by Nassim Taleb in his book Antifragile. That is the titular antifragility. Nassim claims that most things in real life are fragile. Therefore, they seek a state of safeness.

Taleb often uses the coffee cup to illustrate this idea. The ideal situation for a coffee cup is to sit on the cupboard. Untouched, safe, all intact. Anytime someone picks it up, the probability of coffee cup breaking increases. We can deduce that what’s fragile loses from volatility.

On the other side of the spectrum, we have things that are fragile. That is anything that benefits from volatility. That is from various stressors, mistakes, and randomness. Applying this reasoning to a business (especially, enterprise) world, we can notice that most companies would be classified as fragile beings. That’s because whenever something goes wrong, most companies take a step back and defend themselves by bringing up various reasons for the issue, that is, of course, out of their reach.

Yet, we’ve seen a few examples of artists and companies dealing with their own mistakes by moving forward and publicly dealing with the issue. Here we see the combination of two ideas talked over in this article — applying irrational ideas and being antifragile. Two such examples might be Lewis Capaldi publicly mocking Noel Gallagher who criticized the artist and KFC posting the FCK version of their logo after being forced to temporarily shut down dozens of their locations across the UK.

Explore the irrational and magically double your marketing ideas

It’s human nature to prefer what’s irrational over what’s rational and yet, in business, we often stick to what’s been already explored. Escaping that assumption and letting your marketers explore the other side’s grass can bring you many marketing ideas that although seem irrational can bring positive results. After all, experimenting lays in the core of marketing and that is the moment when such ideas pop up.

All the latests posts. One email per month
No strings attached

Sales notifications are a great tool to drive more conversions by evoking the fear of missing out among your customers. Learn how to incorporate them on your website.

Types of Emails Customers Would LOVE to Get from You

There are dozens of different types of emails around the internet. But we don’t want you to get confused. Read the article and concentrate on the main netmails customers eagerly await from you. No time to waste!

How to Say Thank You for Your Order and Win Customers for Good: Best Practices and Templates

Such a simple two-word combination as 'thank you' can make a real difference for your online marketing efforts. Incorporate these 9 'thank you for your order' templates to shape customer experience and reach positive brand perception.

This site uses Akismet to reduce spam. Learn how your comment data is processed. 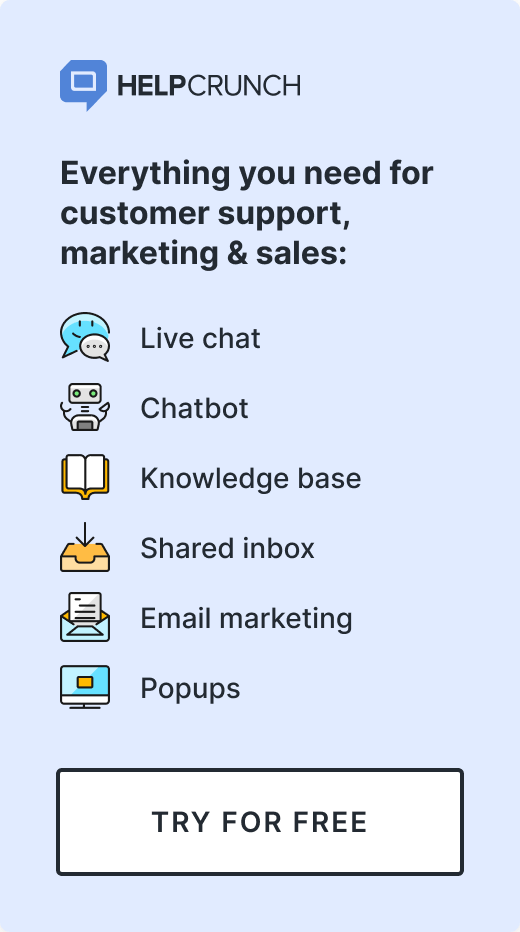